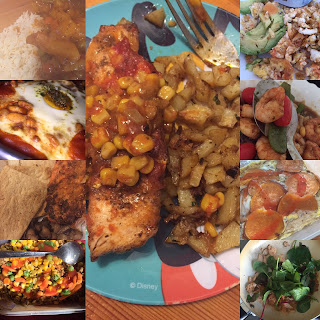 Hi there, I hope you are all well.

As you may know, I started a healthy lifestyle journey a little while after my healthy hair journey and have been doing quite well, I always look to push myself a bit harder and as I have mentioned a few (ok many) times, I love challenges to motivate and inspire me along my way.
For a long while I have been wanting to include more fish into my diet and I went through a time of only eating fish during the day and no meat.
I felt like I wanted to up it and remove all meats and poultry for 30 days so Pescatarian it was.

This was in July and I started my challenge in August. It was much easier than I thought and I got through August feeling great. I had a couple gatherings to attend including a BBQ (arggghhhh lol) but got by without too much longing for the yummy meat dishes.

The most difficult part of my challenge wasn't actually eliminating the meat/poultry or the cravings, it was purchasing ready made foods that were suitable for pescatarians and with no dairy added. I often just chose Vegetarian items but I noticed that these were often laden with cheese, milk and/or cream. I have often had to look for vegan foods to be "safe".

During August, my husband watched with interest as I did the challenge and the boys were very happy to taste my dishes. As August drew to a close, I thought about doing another 30 days and a friend who was going to join me at the start said she really wanted to try so I told her I'd go another month to keep her company The Hubster often spoke about how nice my meals looked and decided he wanted to try it also.
Now that was a big thing!! Hubby enjoys meat and loves chicken..... and that's an underestimation lol.
While I was happy for him to join me, I knew it would mean more work as I could just make do with whatever I had but for him I would have to prepare meals properly, that would mean two different meals and maybe three if his would contain dairy. I can have my meals with out fish at all, but I knew he wouldn't want that.

The second month for me was even easier and I have to admit I didn't miss meat and didn't crave chicken on a day to day basis. I missed certain dishes but I was fine. Hubby on the other hand found it very difficult bless him.

I tried to be creative with the meals but he really missed meat and chicken... A .... LOT!! He said I made it look easy LMBO!!! He found having me prepare his meals at home and sometimes his lunch was great but he found it hard to purchase food while out.

I am proud of his efforts and he did last the month.. hoorrahhhh!!! Now that he is able to eat meat and poultry, he has found that he chooses not to most days and that chicken tasted different to him.

I on the other hand have chosen to go another 30 days/month. I actually cannot believe I have gone 67 days being Pescatarian!!

I realise that I haven't posted about this whole thing on here till now...(oversight and busyness) But I plan on doing many more posts on my Pescatarian challenge with meals etc.

I would love to hear from any of you who have chosen to be Pescatarian or even Vegetarian (ooohh or Vegan) and your thoughts. Also if you have any meal ideas.
Posted by Peechy at 14:31:00 No comments: