Another catch up post. Here is a a little MUPlay session from 4th December 2013 using poundland goodies along with my stash goodies. 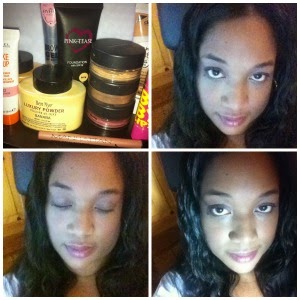 Email ThisBlogThis!Share to TwitterShare to FacebookShare to Pinterest
Labels: glamm

Arrrrgggghhhh!! What a horrible terrible end of year we had.

My lovely baba was rushed into hospital early Christmas morning, he had a cold the few days prior and on Christmas eve he was very ill, he woke very early with a bad fever and was disorientated, I gave him calpol and we went back to sleep. Myself and the boys went about our day and kuppie kept sleeping. He was so tired and as the day went on he woke up and spent time with his brothers but he just lay down not moving, not wanting to eat anything he drank a bit but not much.

When Adj got home he noticed how poorly kuppie was and I'd given him doses of calpol throughout the day but I noticed that he was very hot and each dose seemed to wear off quickly. I did all the dinner suff and started making tags and wrapping presents.....{EVERY year I do this, Every year I say I'll be organised like my mummy and EVERYyear I fail... miserably!} .... all the while having a nagging feeling that something just wasn't right, We wondered if he needed to see a doctor but decided to see how he went.  I finished up for the night and went to lie down but the way kuppie was breathing was making me really worried, It sounded bad and I could see his tummy going in really fast, he was boiling hot and when i touched him I could feel his heart racing. He was making funny noises astough breathing was laboured and painful. I just couldnt leave him and go to sleep but I also didnt want to be all panicy mummy over acting....{ why do I always second guess myself??!!} ... I decided to call NHS Direct and the lady could actually hear how bad kuppie was breathing down the phone. After going through checklist she didnt want to risk it and called through for a paramedic, saying that they would look at him and decide whether to just treat him or transport him to hospital. I changed my clothes and woke Kali up to explain what was happening and to get him to hold Kuppie while I was in the bathroom.

And then we waited.... and waited.... and... you get the idea. I tried to make the front room as neat as possible and packed a small bag with nappies etc incase we need to go to the hospital...... And waited..... Then the ambulance service call me after an hour to apologise for the delay and ask if I still needed the ambulance ??!!! well er yea!! So its back to waiting and waiting, but both advisors told me not to give calpol or any medicines so kuppies fever is raging and as he's lying on me his heart is too fast and the breathing..... ever so often it feels like he's not breathing and I panic, I call back and the advisor can hear my distress but when he realises it's now 2hrs he gets angry and calls ambulance while I'm on the phone.
If I had known Id be waiting till now I'd have got a cab....
When the paramedics arrive its a big ambulance, they take one look at Kuppie and that was enough for them, they took his temperature and look at each other... "yes that quite high" says the smaller of the two. I give him calpol after explaining the advice given, they were livid that I was told not to give him calpol. We go to the ambulance and the taller para says straight up the way his breafhing and rhe way his tummy is pulling in is bad, She listens to his back and shakes her head, saying he's breathing in and out almost at the same time....... she says its like he has pnemonia, my hear races and stops at once.... Im tryhing to be brave and strong but its sooooo scary,

This post is getting very long. I didnt mean to go so in deph but as I typed it all came flooding back and the tears come to my eyes.

Lets just cut a very long and scary story short..... He indeed had pneumonia and a lung infection the docs also diagnosed him with rickets {!!!!} The infection went into his blood which is why he got so sick so quickly I am so grateful that he got well.
I couldnt beleive we were in hospital at Christmas!! The poor boys were great but they didnt have a nice \Christmas at all. Kuppie found all the treatment and hospital time very traumatic and even 3 months down the line he still hasnt gotten over it and neither have I.

\if all that wasnt bad enough, kylo got sick with suspected appendicitis.... He was ill, went to docs but after few more days got worse so we went to the walk in centre and they admitted him ..... we ended up in the same bay as kuppie was in..... crazy!! I just had myself a pity party.

I just didn't feel like blogging but I did take photos and so many times went to blog but I just felt so lost but yaoowwweeee Im back lol. Ive made so many changes to try and get my life organised but thats another post or three :)
Posted by Peechy at 03:53:00 No comments: